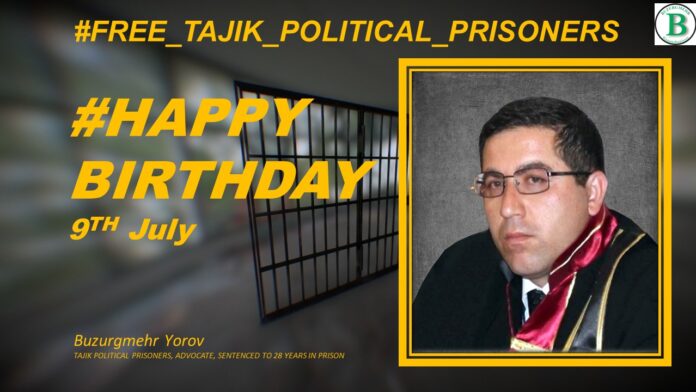 Today, July 9, is the birthday of Buzurgmehr Yorov, a well-known Tajik lawyer, a political prisoner, who was illegally detained and arbitrarily and biasedly imprisoned for his social and political views and professional activities as a lawyer.

Also, the Buzurgmehr Foundation team congratulates all the noble people of Tajikistan with Eid al-Adha.

Who is Buzurgmehr Yorov?

Buzurgmehr Ravshanovich Yorov was born on July 9, 1971 in the city of Dushanbe, Republic of Tajikistan, to intellectual parents.
His father, Ravshani Yormuhammad, is a famous Tajik writer. His mother, Ishokova Hurinisso, is a housewife.

In 1988, he finished general school #11 in Dushanbe. From 1988 to 1989 he worked as a Young pioneer leader at general school #10 in Dushanbe.
In 1997, he graduated from Department of law of the National University of Tajikistan. For several years, he worked as an investigator in the Investigative Department of the Ministry of Internal Affairs in Ismoil Somoni district of Dushanbe.

He took part in the restoration of the constitutional government in Tajikistan from March 1993 to December 1996.

From 1996 to 1998, he worked as a deputy director of the children’s literature publishing house Afsona, where he worked on legal issues. From 01.11.1998 till the day of his detention on 28.09.2015, he was a defence attorney. First he worked in a law office in Shohmansur district of Dushanbe, from 06.09.2007 as the Chairman of Dushanbe Bar Association, and from 15.05.2009 as the Chairman of Sipar Bar Association of the Republic of Tajikistan.

Also, from 1998 till 2007, he was professor of the Chair of Criminal Law and Law of Criminal Procedure, Department of Law, University of Taxation and Law, where he taught criminal law, law of criminal procedure, legal psychology and judicial ethics.
He took part in the discussion of many cases. He applied to the UN Human Rights Committee on the violation of human rights by authorities of Tajikistan 12 times, 7 of his requests were satisfied, 1 was rejected, and 4 others (as of 28/09/2017) were under consideration.

On September 28, 2015, he was arrested by the authorities of Tajikistan on trumped-up and biased charges, and after three trials, he was sentenced to 28 years in prison.
Happy birthday, Buzurgmehr Yorov!